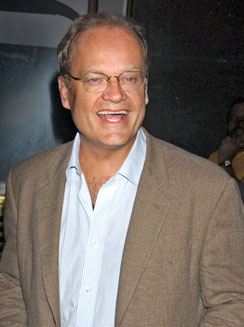 Kelsey is an American actor who was married to Camille Grammer.

A five-time Emmy Award winner, Grammer is the first actor in television history to receive multiple Emmy nominations for performing the same role on three series. He received two nominations for his original portrayal of Dr. Frasier Crane on "Cheers" (1982), another for his guest appearance in that role on "Wings" (1990), and nine nominations (earning four awards) as Outstanding Actor for his work on "Frasier" (1993). Over the years, Dr. Frasier Crane has become one of television's most endearing and enduring characters. In addition to his Emmys, Grammer has won two Golden Globe Awards, two American Comedy Awards and a People's Choice Award for his portrait. Grammer's distinctive voice has been heard in several hit animated features, including the voice of "Stinky Pete" in Disney's hit Toy Story 2 (1999) and a part in Anastasia (1997). On television, he has also been seen in several mini-series and movies. In 1996, he hosted an hour-long salute to Jack Benny for which he served as executive producer. He also starred in HBO's award-winning The Pentagon Wars (1998) (TV).

Born in St. Thomas in the Virgin Islands, Grammer was raised by his mother and grandfather in New Jersey and then Florida. After his grandfather's death, Grammer was drawn to the works of William Shakespeare and spent two years at the prestigious Juilliard School. He then dove into the world of regional theater, eventually making the leap to Broadway with roles in "Macbeth" and "Othello." He joined the cast of "Cheers" (1982) in 1984. His autobiography, "So Far", was published in fall 1995.

Retrieved from "https://real-housewives.fandom.com/wiki/Kelsey_Grammer?oldid=4739"
Community content is available under CC-BY-SA unless otherwise noted.