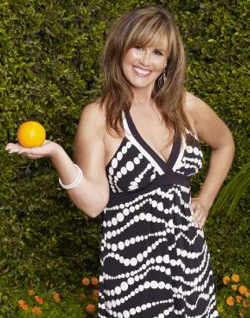 Quinn Fry, was born in Fort Knox, Kentucky... but besides those first 3 weeks of her life has never returned to KY and has been living in California ever since. Quinn joined the Orange County series of the Real Housewives in Season 3. Quinn grew up in both northern and southern California, living on a farm milking cows, feeding chickens and riding horses in Freshwater CA, before settling in Newport Beach after finding a dream job as the Visual Manager of Nordstrom, South Coast Plaza. Before joining the show, Quinn worked as an internet marketing manager at Cox Communications and was also theb editor of OC Now.com a hugly successful Orange County entertainment website, which kept her heavly involved in the social scene and resuaurant openings and local gossip. Quinn is a divorcee of 14 years and has a daughter Shannon from her first marriage to her high school sweetheart. She also has a son, Colin who attended San Clemente High School and appeared on the show.

As a single parent, Quinn is known to navigate Orange County's crazy dating scene and is an avid lover of younger men. On the show, Quinn once brought a date as young as 26 years-old to a party, much to the chagrin of her fellow housewives. Vibrant and fun-loving, 53 year-old Quinn never admits she is older than 29 years old and enjoys creative projects, which led her to pursue interior decorating on the side. Unlike other housewives, Quinn did not engage in gossip and did not indulge in plastic surgery or Botox on the show, possibly making her stand out amongst the rest. After Season 3, Quinn did not return for Season 4. She currently resides in Humboldt County CA in a quaint rural mountain town called Willow Creek, but during the cold winter in Northern California she travels back to OC and can usually be found someplace on beautiful Balboa Island, CA.

Although not appearing in any standard episodes of the shows fourth season Fry did make a guest appearance in "The Lost Footage" episode.

Retrieved from "https://real-housewives.fandom.com/wiki/Quinn_Fry?oldid=8857"
Community content is available under CC-BY-SA unless otherwise noted.